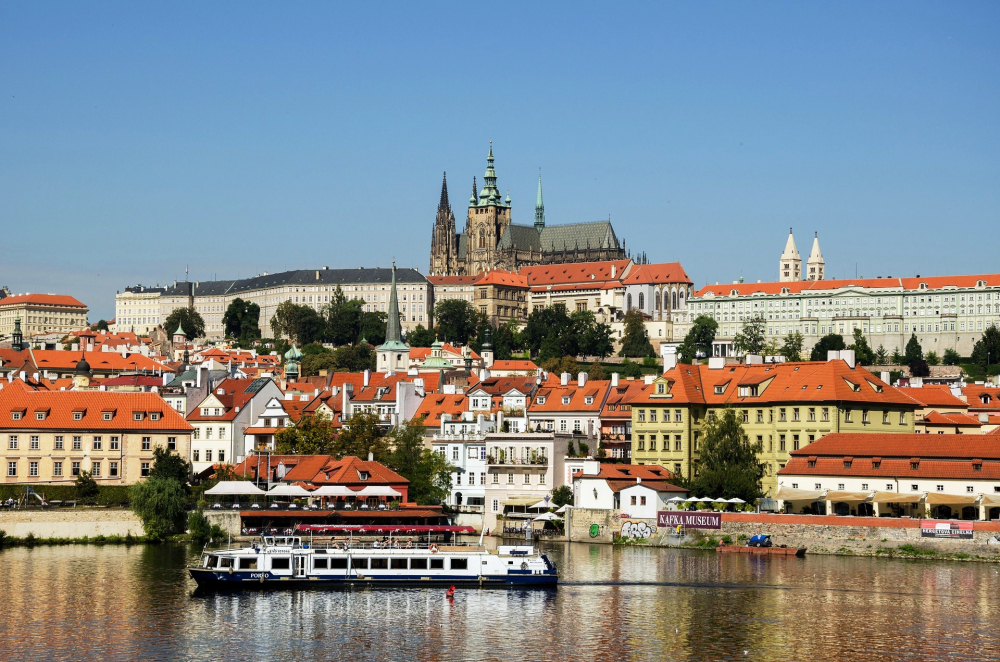 Prague Castle is a complex of palaces and churches, as well as one of the symbols of the Kingdom of Bohemia, which tells about the most important historical events of the country. The main fortress was erected on the Opyš cliff, stretching from Petršinsky Hill to the Deer Moat. Prague Castle (Pražský Hrad) is included in the UNESCO World Heritage Sites and the Guinness Book of Records as the largest castle and the largest presidential residence in the world.

The history of Pražský Hrad dates back to the 9th century when the first Christian church was built on the bank of the Vltava by order of Duke Bořivoj (the first Duke of Bohemia). Around this time, Vyšehrad was built on the other side of the Vltava, and later Staré Město, Nové Město, Malá Strana and Hradčany appeared. Today they are four separate districts of Prague.

In 920, on the eastern side of the duke’s court, St. George’s Basilica was laid down. At that time, Vratislaus I was the ruler of Bohemia. And in 929, his son Wenceslaus I built St. Vitus Cathedral, which is located just to the west. For centuries, these churches were completed and reconstructed, and today they are the main attractions of Prague Castle. 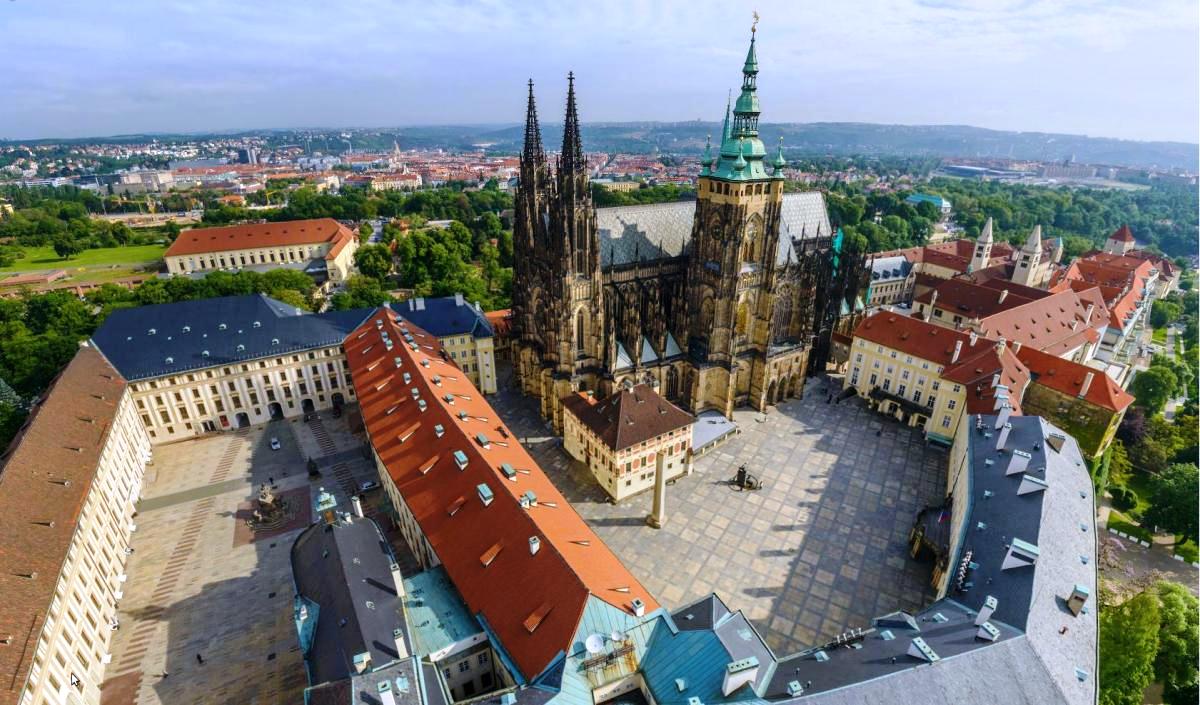 Centuries passed, the rulers, culture and, accordingly, architecture, changed. New palaces, squares, and gardens began to appear in Pražský Hrad. The Romanesque style was replaced by the Gothic, then the Baroque, and then the Renaissance styles.

Today Prague Castle occupies the territory of 70 thousand sqm. Hundreds of thousands of tourists come here every year; indeed, there are many places to see in Pražský Hrad.

The complex can be entered through three entrances, but Matthias Gate is the main one, which is located on the side of Hradčany Square. The golden arch and baroque sculptures are installed near the entrance, where the guards in parade uniforms meet the tourists. The arch is crowned with the symbols of the Czech Republic and Austrian Empire; the gate is guarded by the stone sculptures. The first courtyard of the castle limits the entrance. 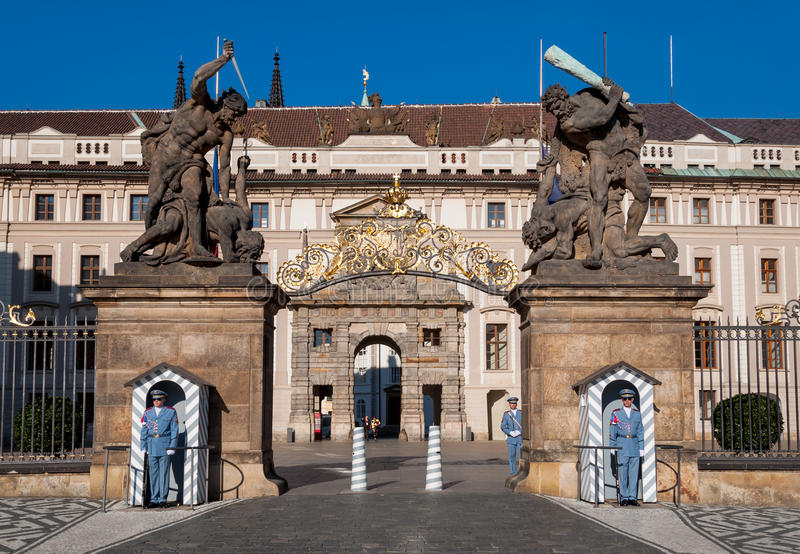 At the top of the gate, you can see the inscription “1614”. This date is considered the date of the main entrance construction completion. There is an assumption that the gates were erected under Rudolph II (the 80s of the 16th century). But since the project was completed under Matthias II, it is the date of his reign that marked the inscription.

The Second Courtyard of Pražský Hrad: the Landmarks

Passing Matthias Gate, the view of a small courtyard arises before your eyes. In the center, there is a fountain, built in 1686 by the sculptor Jerome Kohl. But since the installation of the fountain composition was carried out under the rule of Leopold I, the fountain is called Leopoldova, and the “L” monogram is indicated on the cup. Besides the fountain, you can see here three lions holding a sphere. The composition also includes images of ancient heroes: Mercury, Vulcan, Neptune, and Hercules that support the cup with tritons. 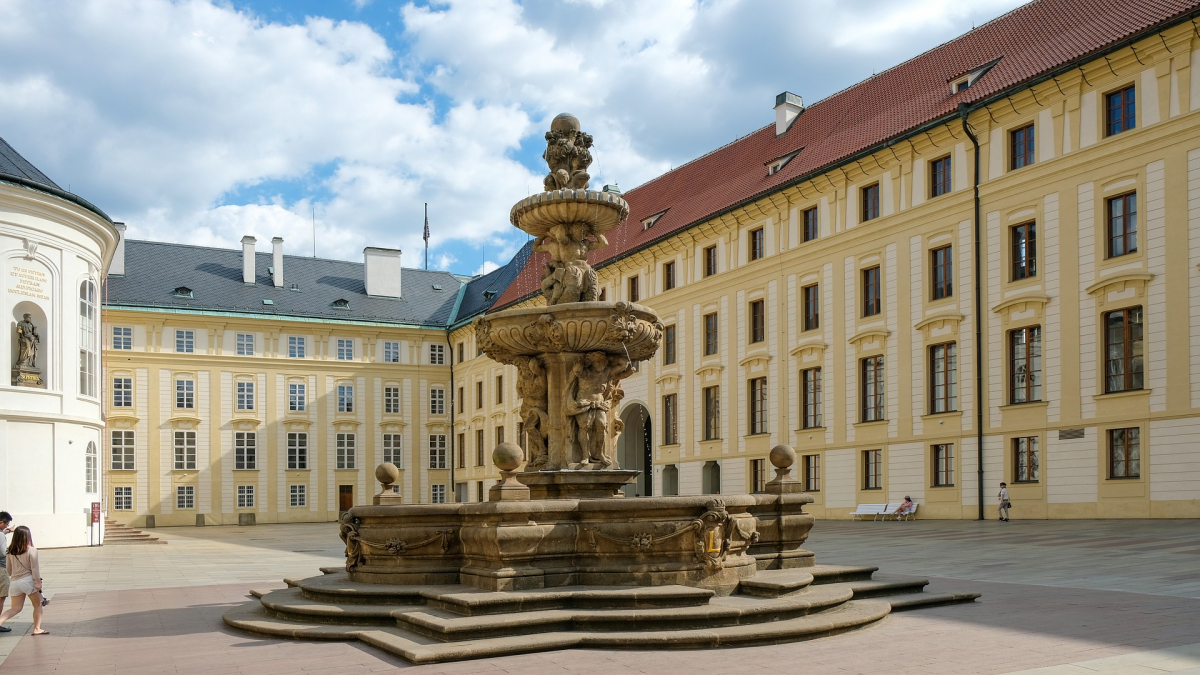 Near the fountain, there is a well built in the 18th century. Its depth is 14 meters, and the well is decorated with the Renaissance laced lattice. Until the beginning of the 20th century, people used the well actively, but today it serves just as a decoration element. 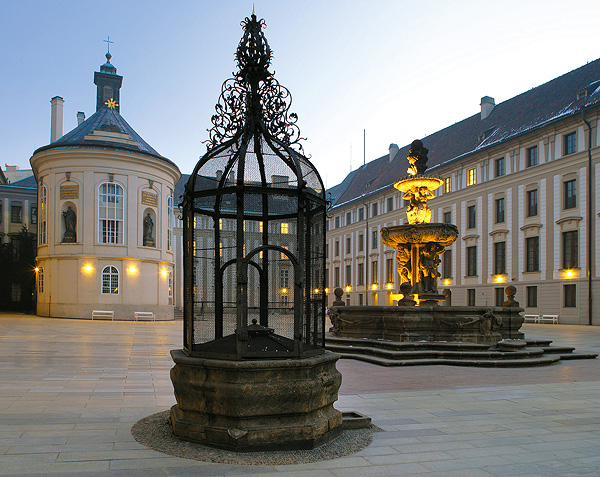 Behind the well, there is a north entrance to Prague Castle. From this point over the Powder Bridge, you can get to the Royal Garden. A gate is guarded by the guardsmen.

There is Holy Cross Chapel in the small courtyard. This object appeared as a result of the Maria Theresa’s request to the architect Nicolò Pacassi “to give some pomposity to the royal residences in Bohemia”. Anselmo Lurago worked on the chapel construction from 1756 to 1764. Today the chapel serves as an exhibition hall where you can see the Svetovid treasures. 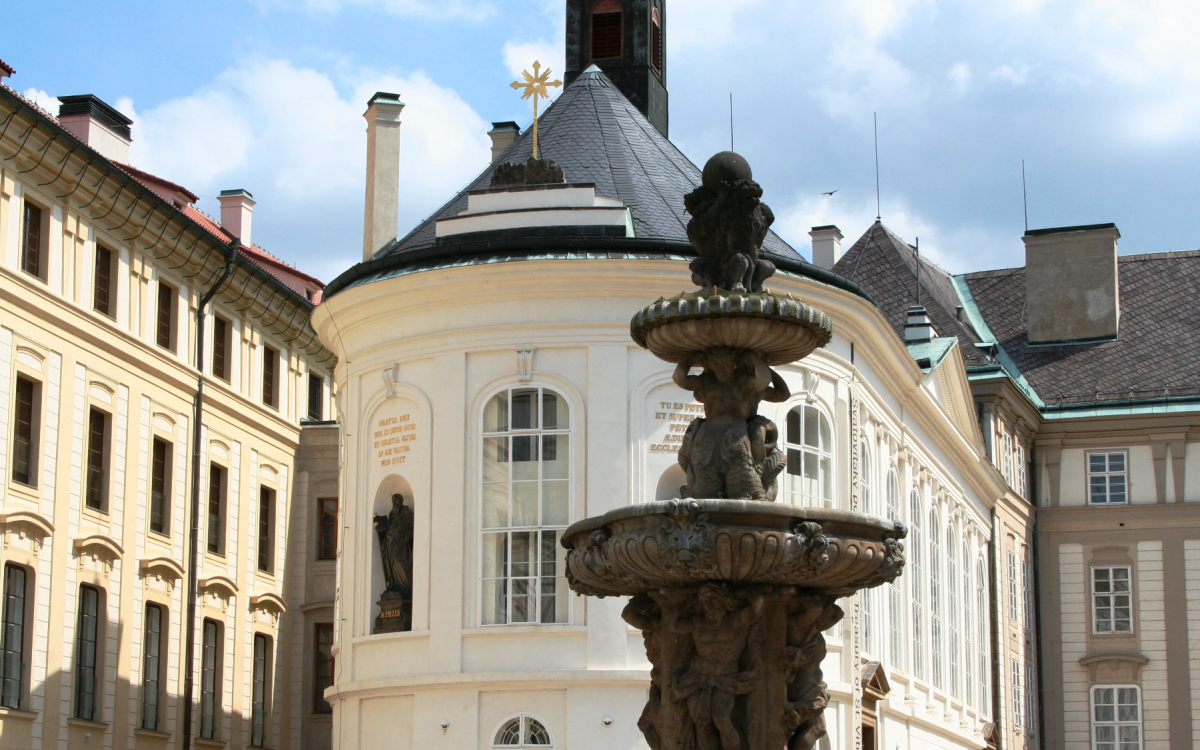 In the center of the courtyard, there is the St. George Monument. This composition was created in 1373 but it was damaged in a fire, after what the statue had undergone a reconstruction. An issue to restore this architectural object arose again but it was decided to transfer the monument to the Old Royal Palace. The original sculpture of St. George was replaced with a bronze copy. 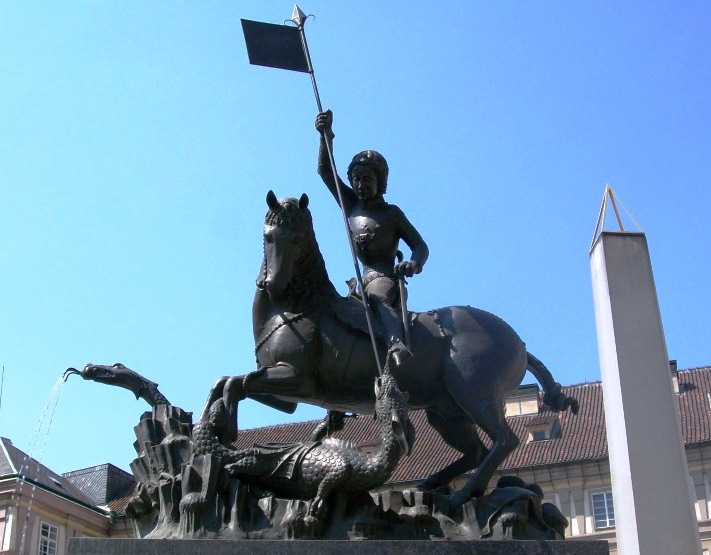 The principal point of interest of the main (third) courtyard, and, indeed, the city of Prague, is St. Vitus Cathedral. Once you come through the arch, you see a stunning façade of the building. 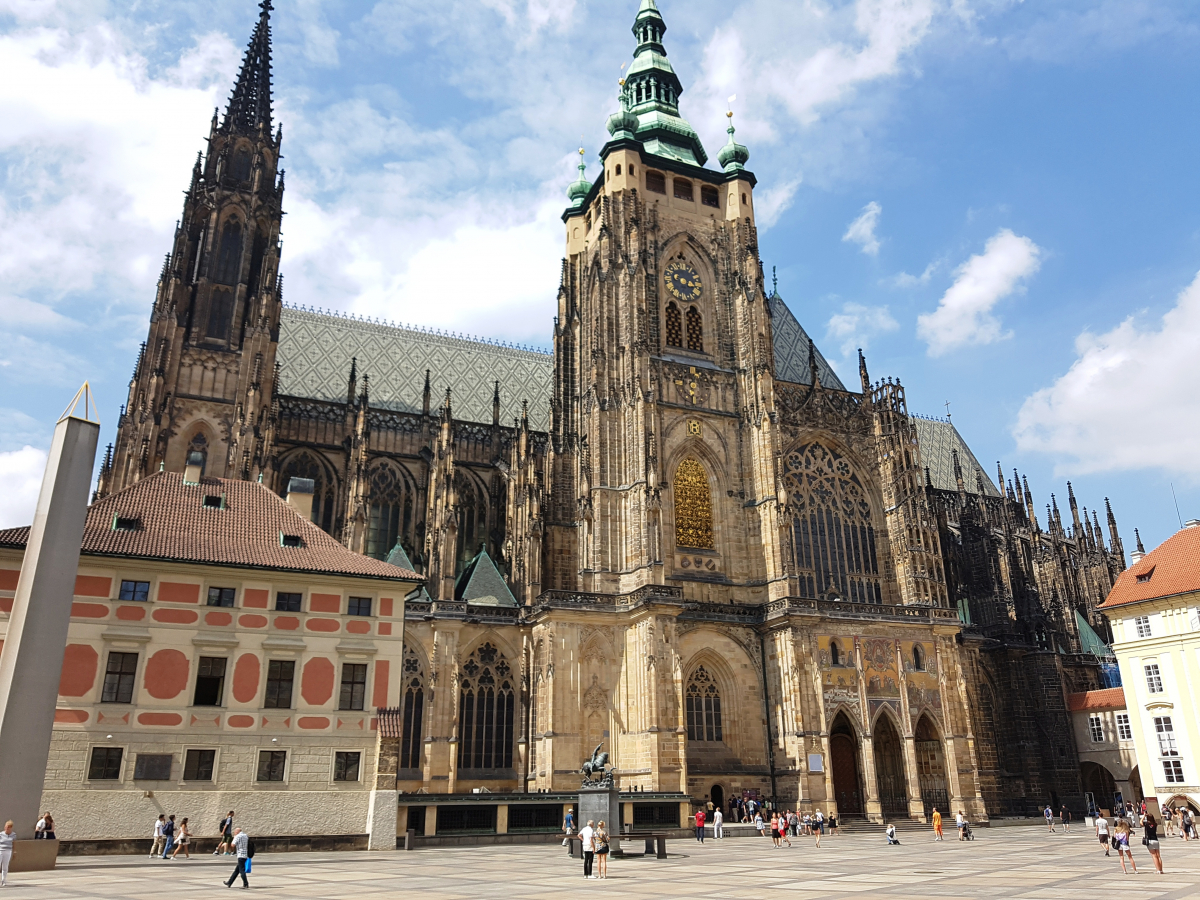 This Cathedral was being built for 600 years! The first stone was laid down under King Karl IV in the middle of the 14th century, and the construction was finished in 1929. It’s hard to imagine how many architects were involved in the process of the cathedral building.

The Cathedral is made in the Gothic style. It is adorned with three portals with bronze sculptures, a rose window, two 80-meters stone towers, and a big South Tower with a belfry, the height of which is 96 meters. There are two dial plates on the tower: one shows hours, another one says minutes. 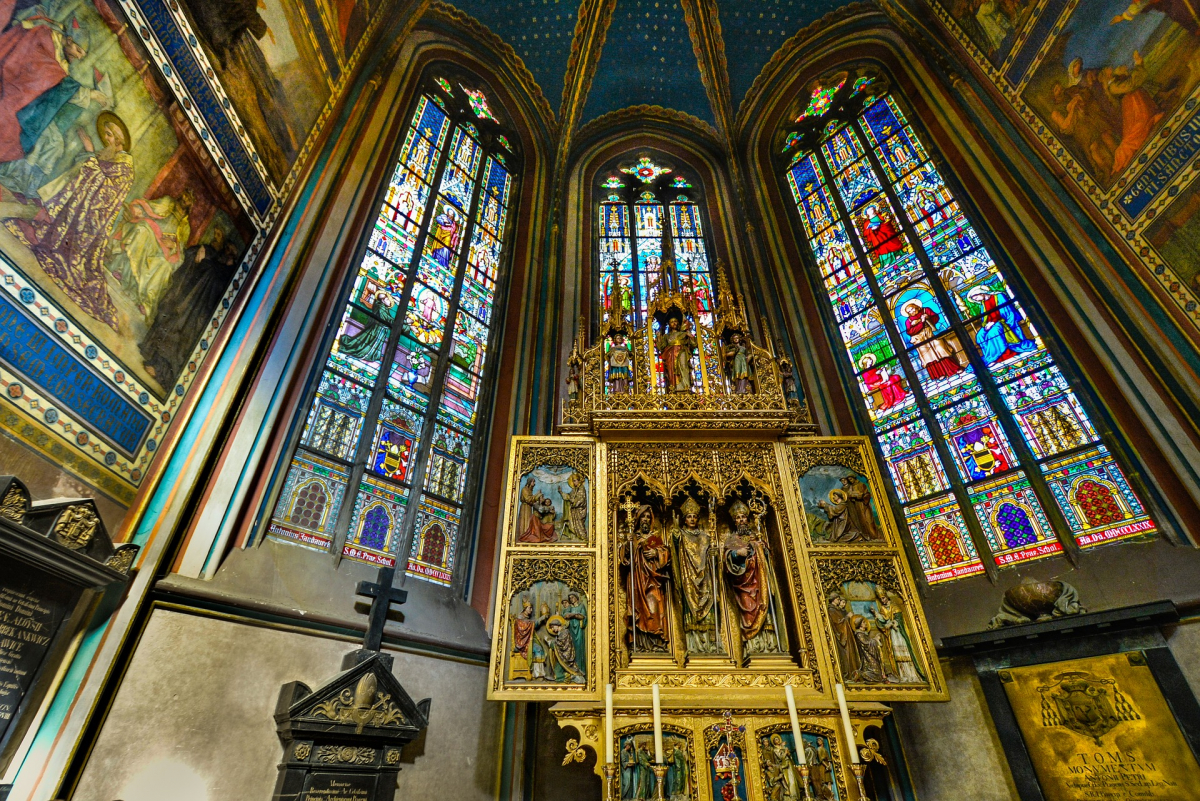 After inspecting the interior of St. Vitus Cathedral, you can go up to the viewing platform and look at the city of Prague from a bird’s-eye view.

Within the third courtyard, there is the Old Royal Palace that was the main residence of the Bohemian kings and dukes (from the middle of the 12th century to the beginning of the 14th century). The palace is a bright representative of late Gothic architecture. 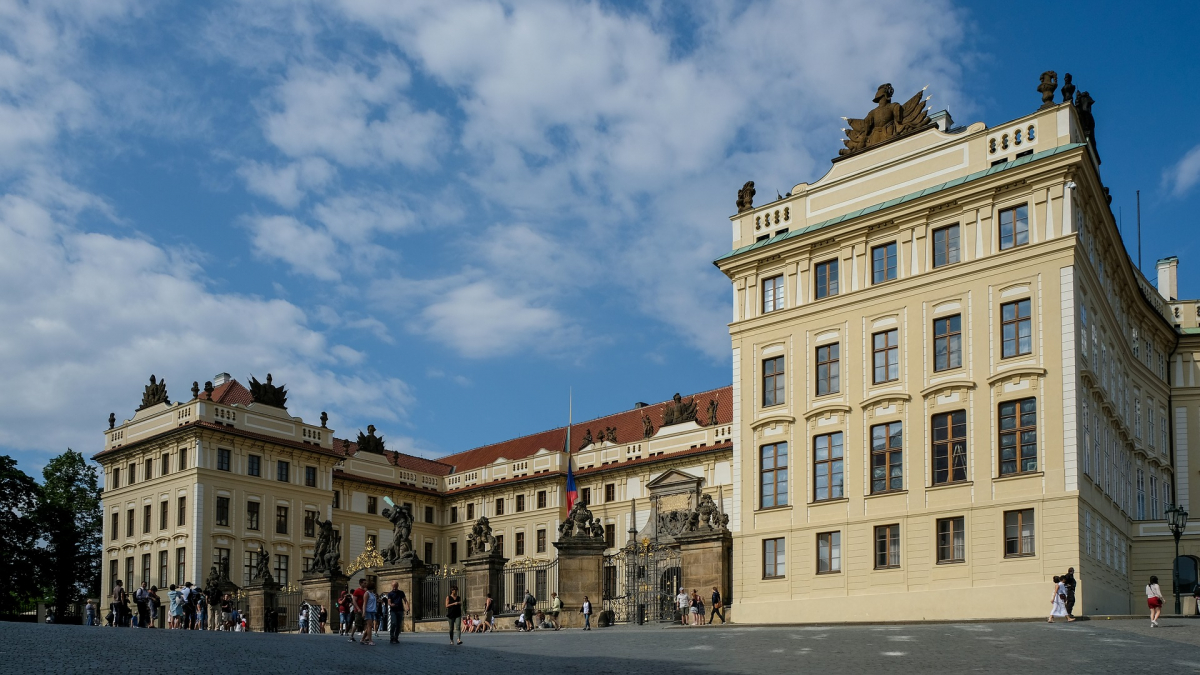 Here you can observe an exposition “History of Pražský Hrad”, which tells the story about the castle development from the times of the first settlements till the present. During a tour around the exposition, the visitors have a possibility to visit various thematic rooms, such as “The History of Foundation”, “The History of Feast”, etc.

The third courtyard ends with the St. George Square where St. George Basilica is located. The church is made in the Romanesque style. This building has a unique story: its construction was initiated in 920, and, moreover, the Basilica is a shrine of many Czech rulers. 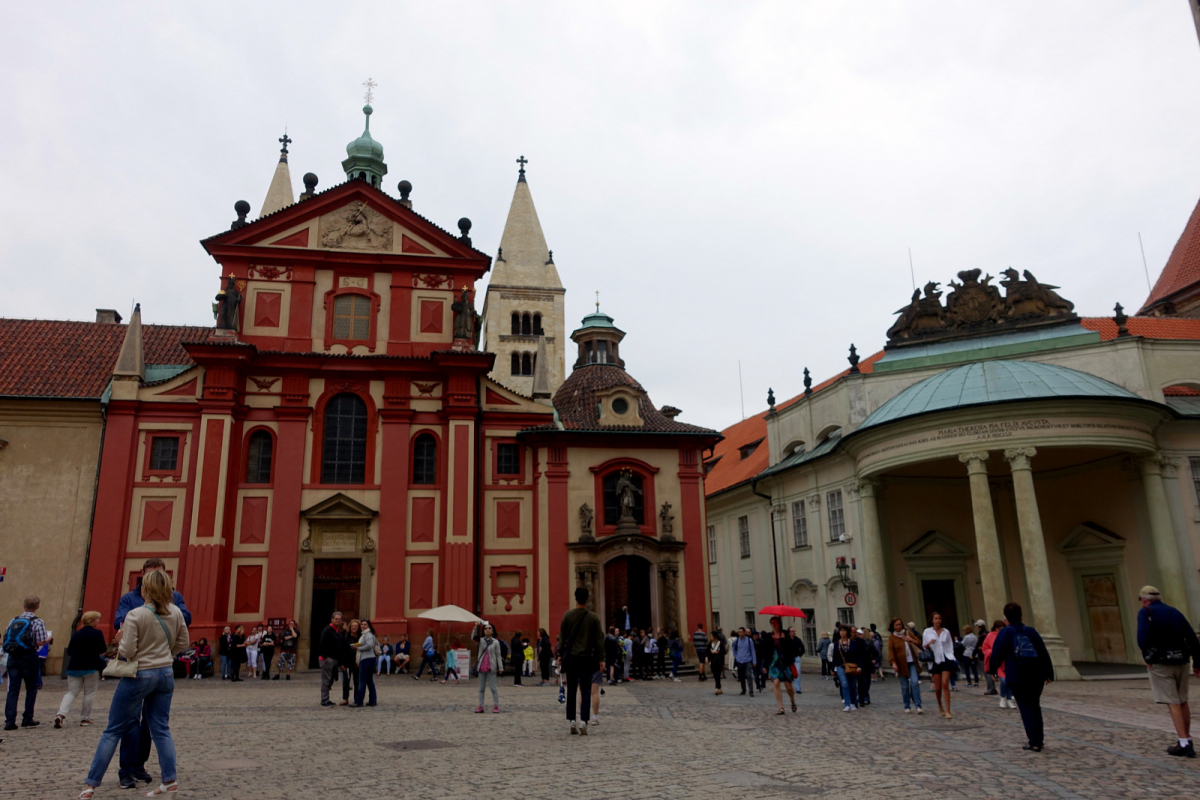 The white towers of the Basilica were erected in the 12th century, but their original appearance has preserved until today. The red façade of the church appeared only in the 17th century. Once the maids from the noble houses were the novices here, but today, various concerts and exhibitions are arranged within the walls of the Basilica.

You can get acquainted with the oldest collection of paintings of the Czech Republic in the Picture Gallery. Here the canvases of Dutch, Italian, German, and Flemish artists of the 17th century are exhibited: Titian, Cranach, Rubens; as well as artists of the Czech school of the 18th and 20th centuries: Jan Kupecký, Mikoláš Aleš, Petr Brandl, Vojtěch Hynais. 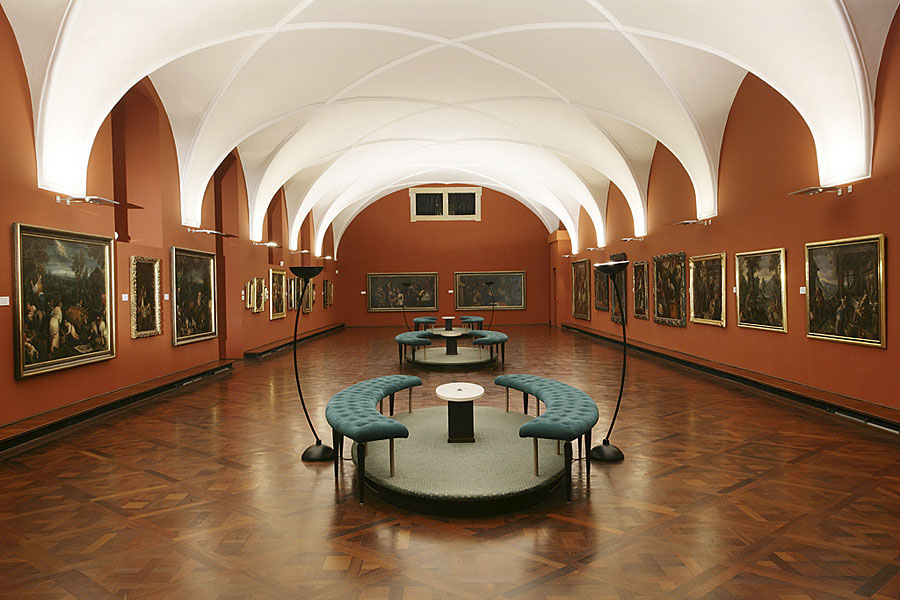 King Rudolf II was the initiator of the Picture Gallery in the 16th century. He was known as the connoisseur of art, patron, and protector of the alchemists.

The Royal Garden was founded in the 1534 year by the king of Bohemia Ferdinand I. The garden is the most valuable historical heritage of the landscaping complex of Prague Castle. Initially the park was established in the Italian style, but today it has a look of the 19-century English Garden. The main entrance to the park is located near the Powder Bridge. 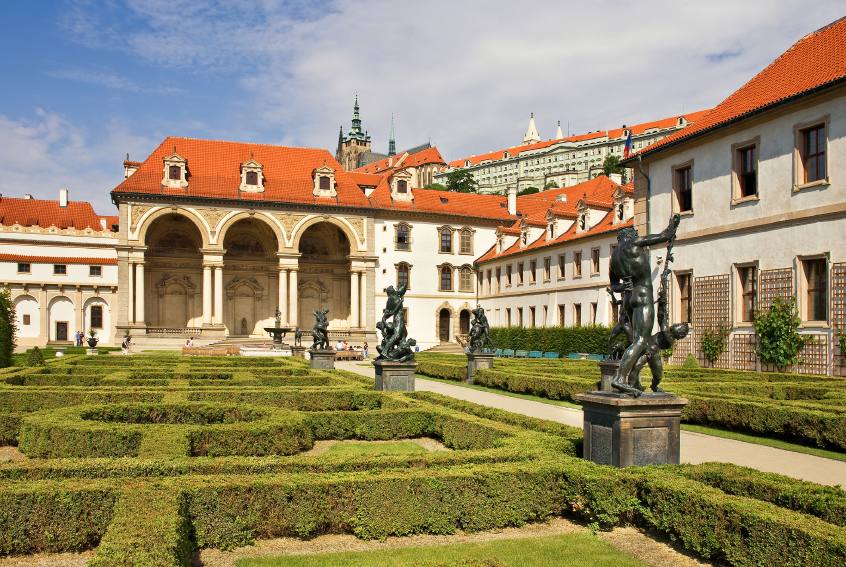 Besides the Royal Garden, there are also the South Gardens, known as the Hartig Garden, Paradise Garden, and Garden on the Ramparts. To get here you can from the side of the third courtyard, from the Old Castle Stairs.

As in Buckingham Palace in London, the changing of the Prague Castle Guard is a very spectacular event. The ceremonial guard changing takes place every day at 12 pm, and the standard one – every hour (in winter from 7 am to 6 pm, in summer – from 7 am to 8 pm). The Castle Guard stands near the central entrance, the entrance to the second courtyard, and the Black Tower.

Location of the Prague Castle

Metro: go to the Malostranská station and then walk up 400 meters the Old Palace Stairs.

By Tram: no. 22 go to the stop Pražský Hrad and then go down 300 meters along the street to the gate with Castle Guard.

The more detailed information you can find on the official website.

Near the complex, there are many hotels and hostels where you can stay. To choose and book a hotel in Prague you can on our Planet of Hotels portal. 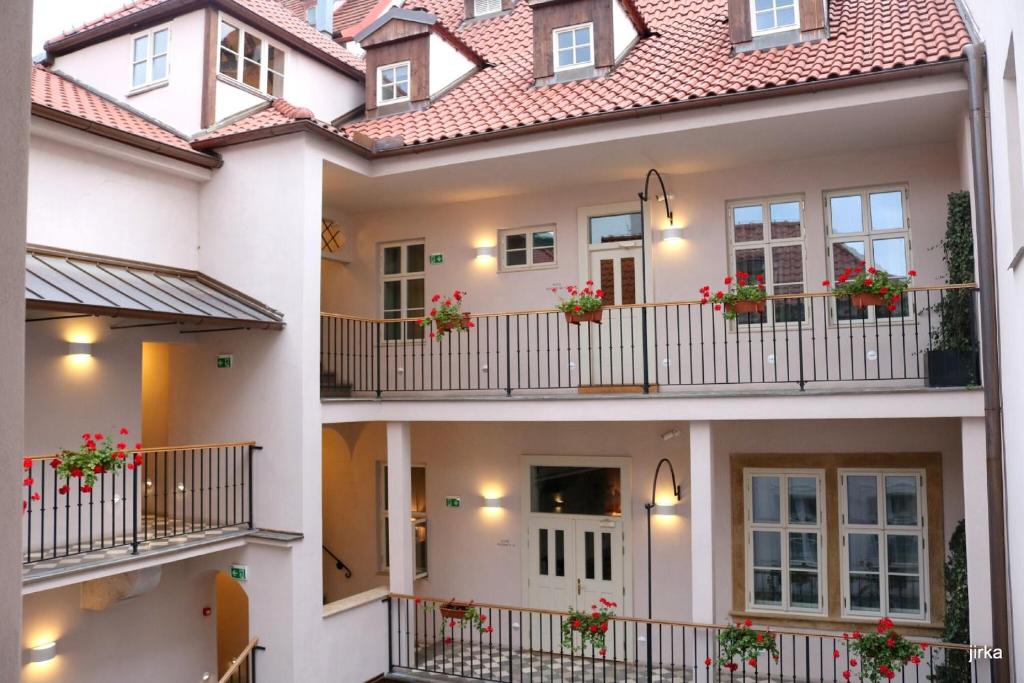 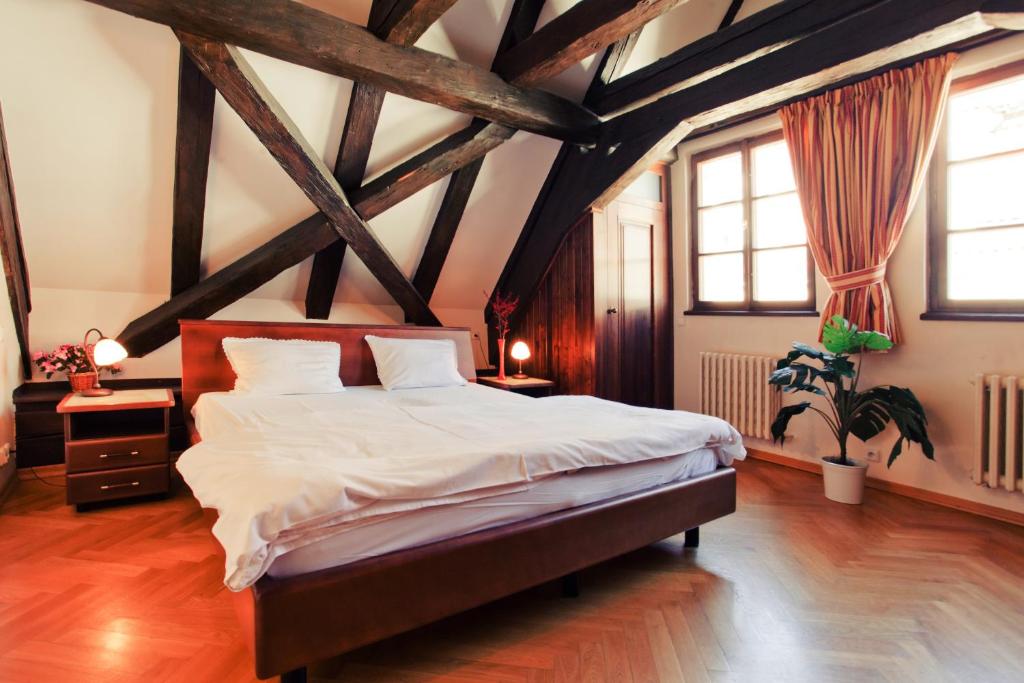 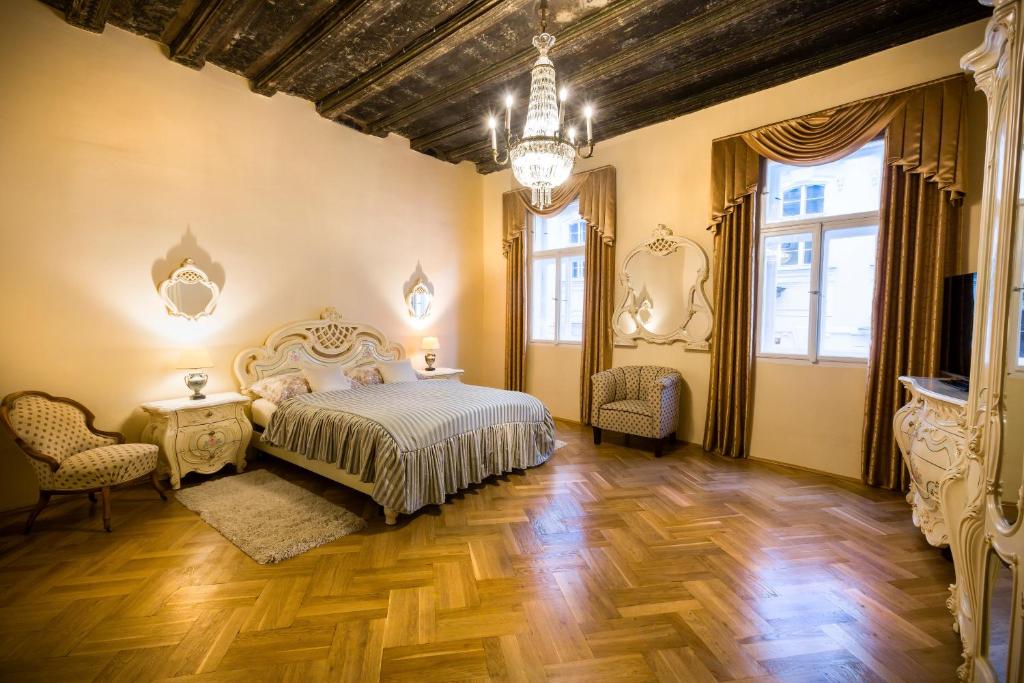 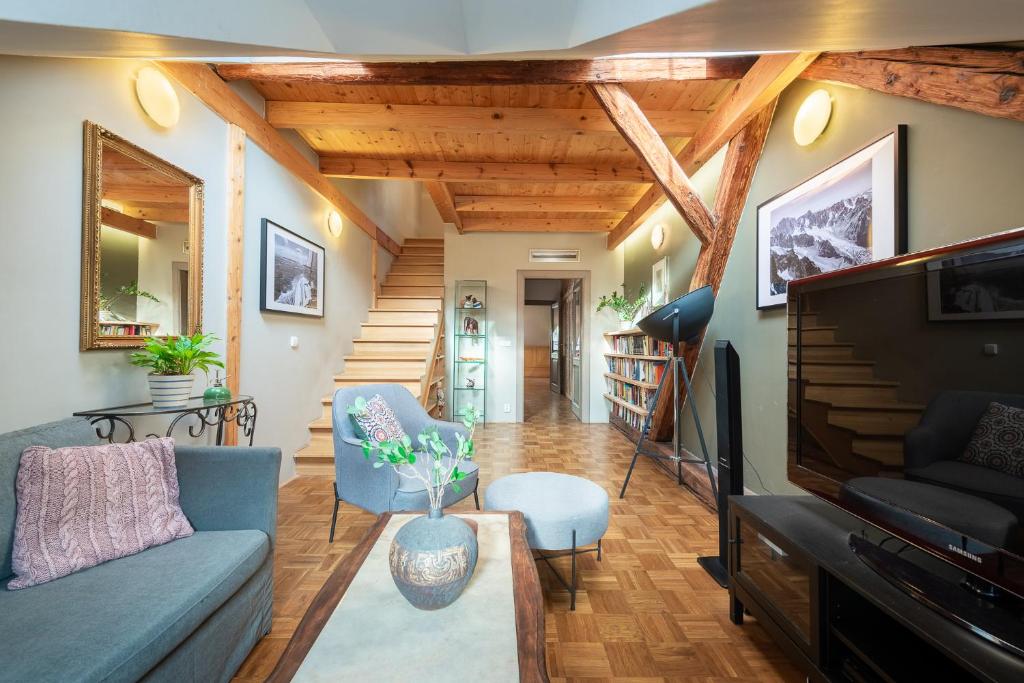 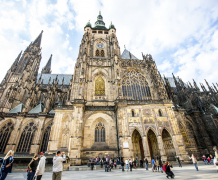 St. Vitus Cathedral
One of the most beautiful gothic churches in Europe, the Cathedral of Saints Vitus, Wenceslaus and Adalbert in Prague is seen from every part of the city. The rest buildings made in the Gothic style in the Czech Republic pale before this Cathedral: it is so unique and extraordinary. The church is situated on the territory of Prague Castle. 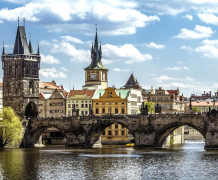 Charles Bridge
Charles Bridge in Prague is a landmark of the Czech capital. It is a very atmospheric place imbued with a spirit of old times. From this point, you can admire the amazing sceneries of the city, observe the sculptures, and make a wish. 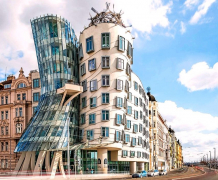 Dancing House
The Dancing House, or as it is called in Czech Tančící dům, is an extravagant building in Prague, that is located on the front of the Vltava. The locals call the towers of this house Fred and Ginger in honor of the famous dance couple of the 20th century: Fred Astaire and Ginger Rogers. The widening to the top stone tower with metallic “hairs of its head” symbolizes Fred...