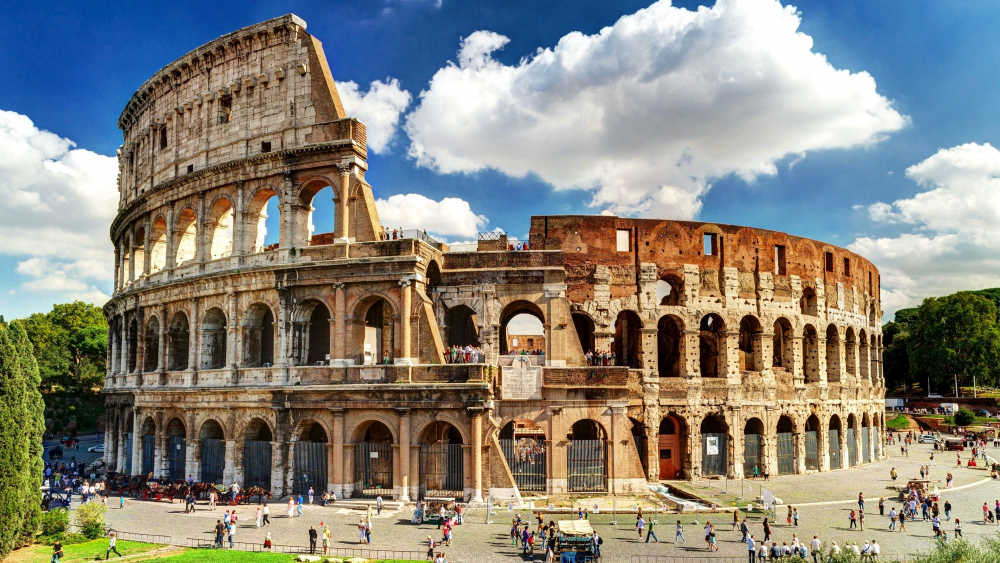 The Colosseum is a symbol of force, power, and age-long history of Rome; it is one of the most famous landmarks in Italy. It is considered the most beautiful and largest stadium of the ancient world that was built in the form of an amphitheater in the first century. Construction of this grand erection was initiated after numerous victories of the emperor Vespasian in Judaea. Development of the Colosseum lasted for 11 years, during which an impossible was done – high quality, total work, and the introduction of the advanced but inconceivable at that time technology – a conveyor system!

The Colosseum in Rome: Fast Facts

Probably, one of the most genius solutions was to lighten the constructions: 240 imposing three-layer arches, faced with travertine from the outside, surround the concrete and brick ellipsis, which is 188 meters in length, 156 meters in width, and 57 meters in height. It was a revolution in the world building and construction work as the concrete blocks and terracotta bricks were invented. By the way, about 1 million bricks were used in the construction of the Colosseum. 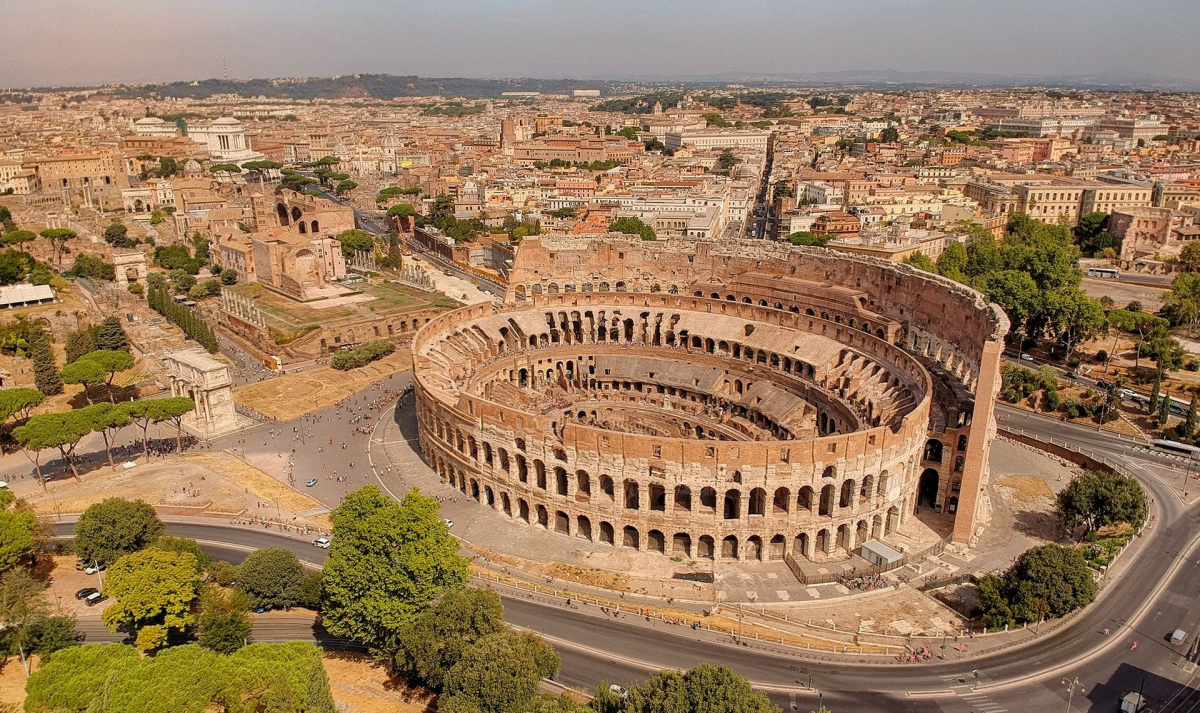 Along the roadways, you can see the poles, the purpose of which is still being disputed. According to one version, the ropes of the tent were fastened to the poles, the other claims that the pillars were some sort of turnstiles to keep the crowd out. Each spacing served as an entry to the amphitheater, where even today you can see the numbering.

Every detail is thought out here - in case of any unforeseen situation, 55 thousand spectators could leave the Colosseum in 5-10 minutes. Since that time, no building with such a discharge value has been built. This miracle of architectural and engineering thought got its official name from the Latin word "colossus" that is translated as "giant."

The Rome’s Glory Won with Blood and Pain

So far, many are impressed by the number of animals and people who had passed through the arena of the amphitheater. In honor of the opening of the stadium, the hundred-day games were announced, during which the citizens of Rome had an opportunity to watch the battles of thousands of gladiators and the same number of tigers, lions and other predators that were brought here from all parts of the empire. The fighting and killing of wild animals, which were arranged only with specially trained gladiators, besides a visual appeal, had a symbolic meaning. Such battles with mighty animals emphasized the empire's ambition, its status, and greatness.

Now the fact that the Romans could solve technically complex problems was completely proved, and they believed that nothing was impossible for them. Thanks to this approach, today the amphitheater is the most popular attraction in Rome. 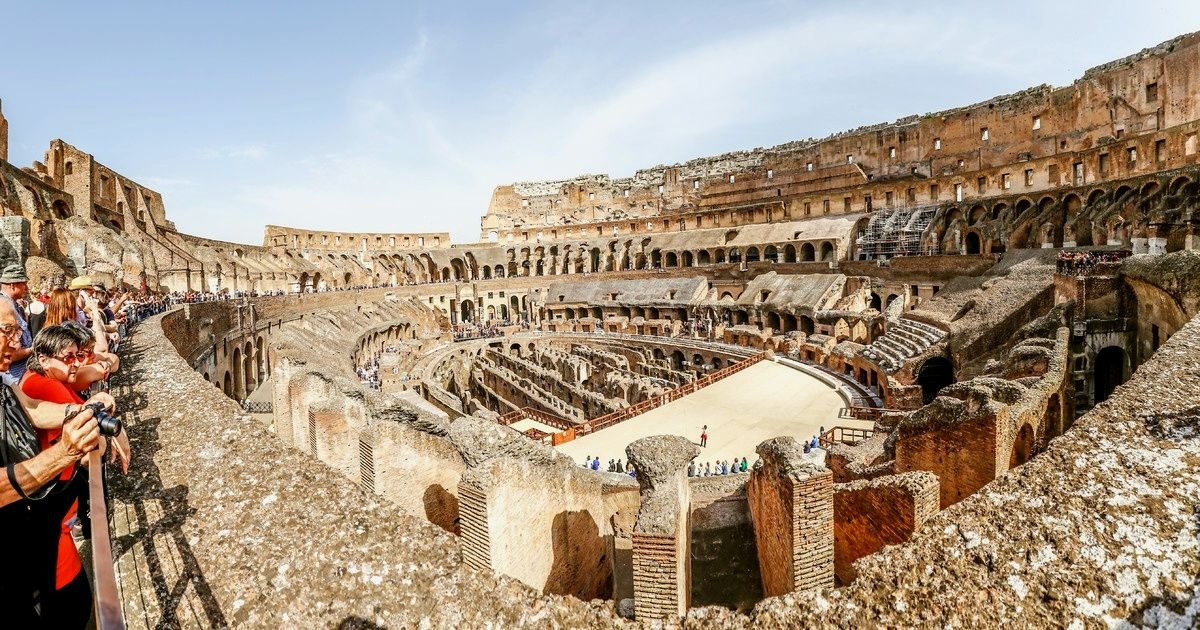 The last entrance is 1 hour before closing. 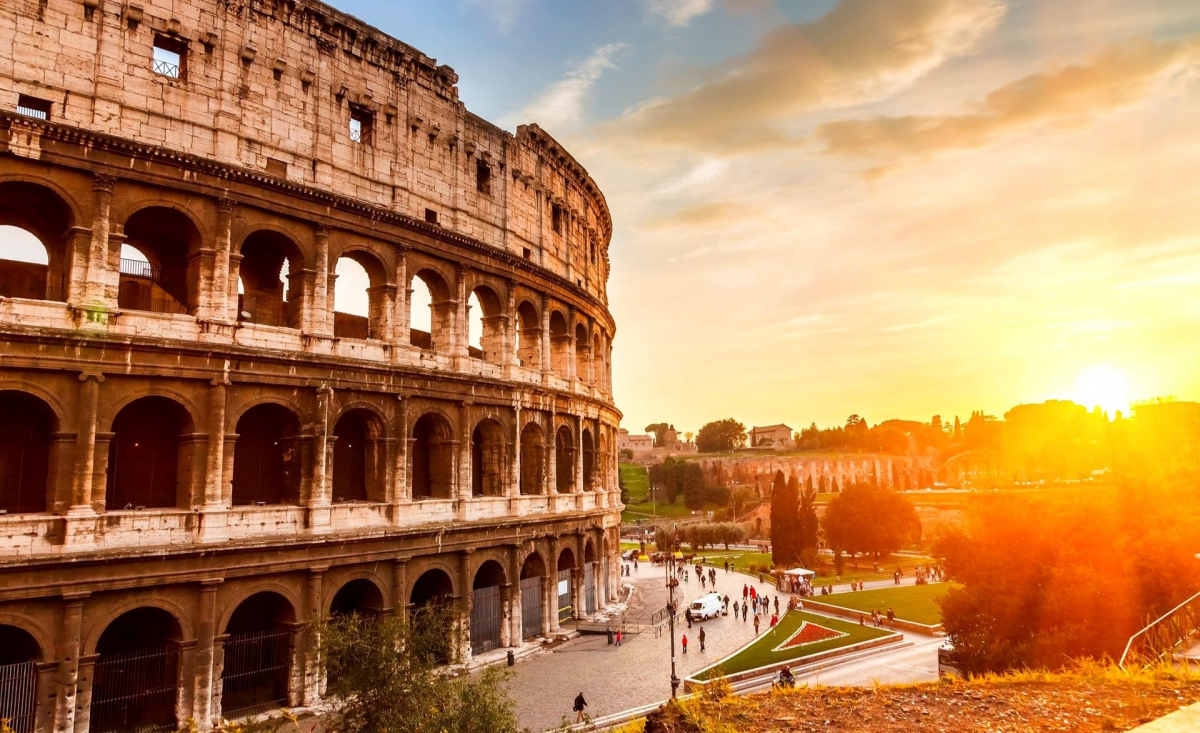 After seeing the main sights of Rome, do not forget to visit the Vatican and, if possible, visit the Sistine Chapel, which is a museum for works of the Renaissance.

Find out which Rome hotels are the best to stay. 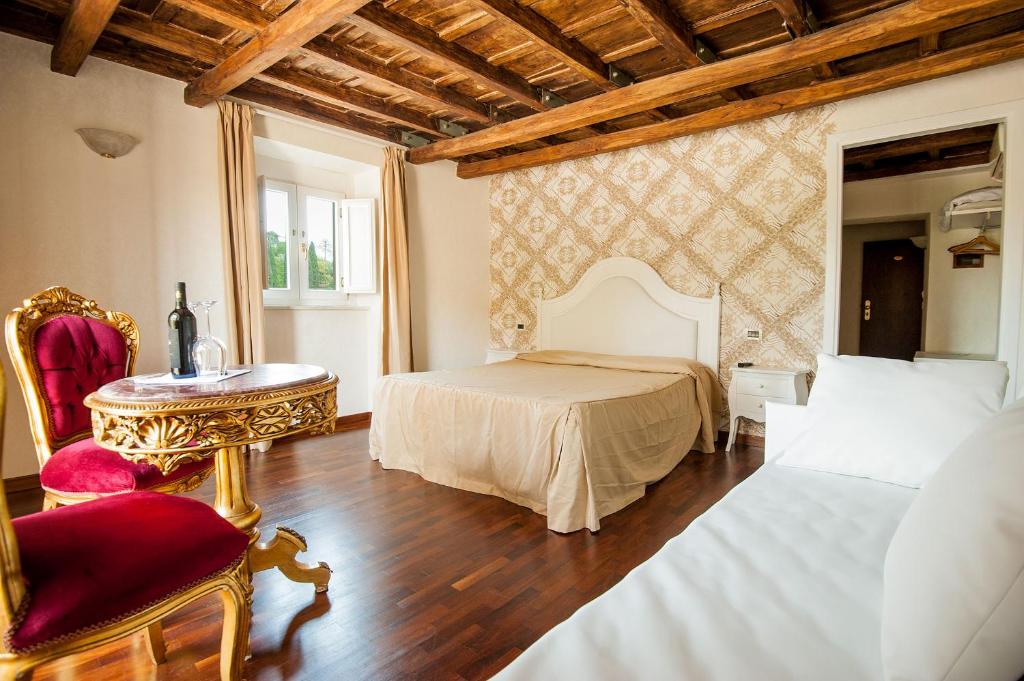 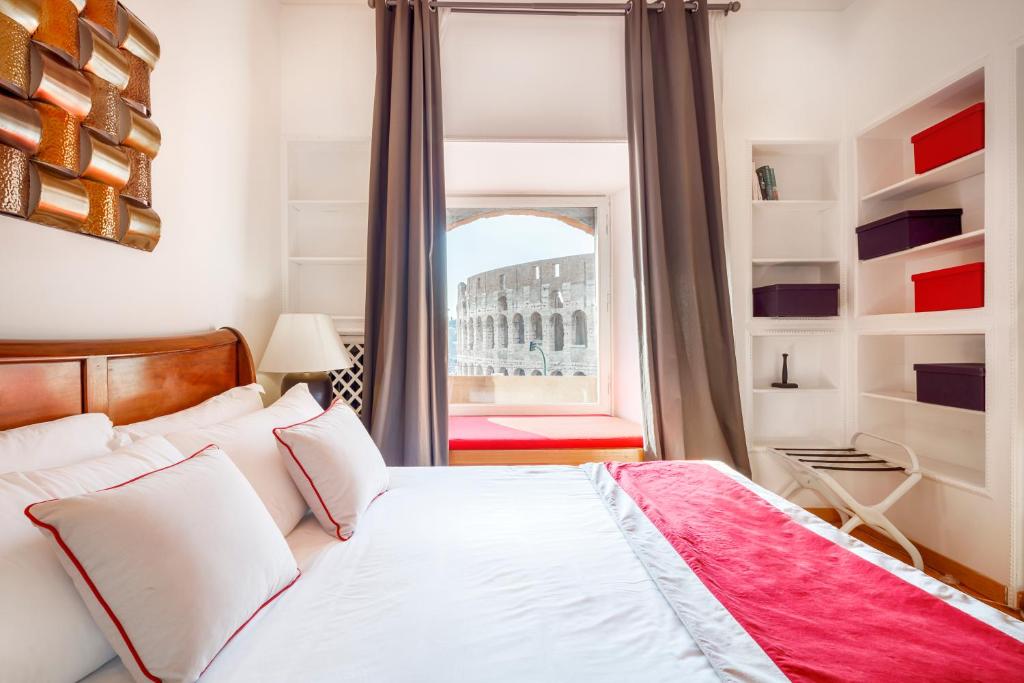 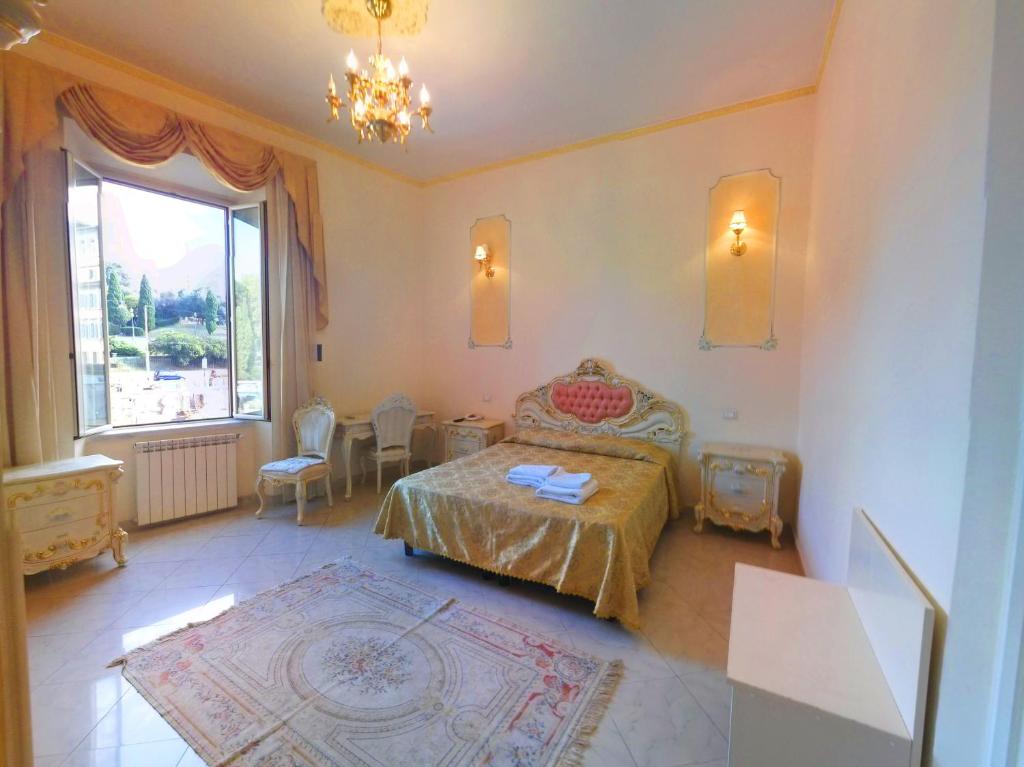 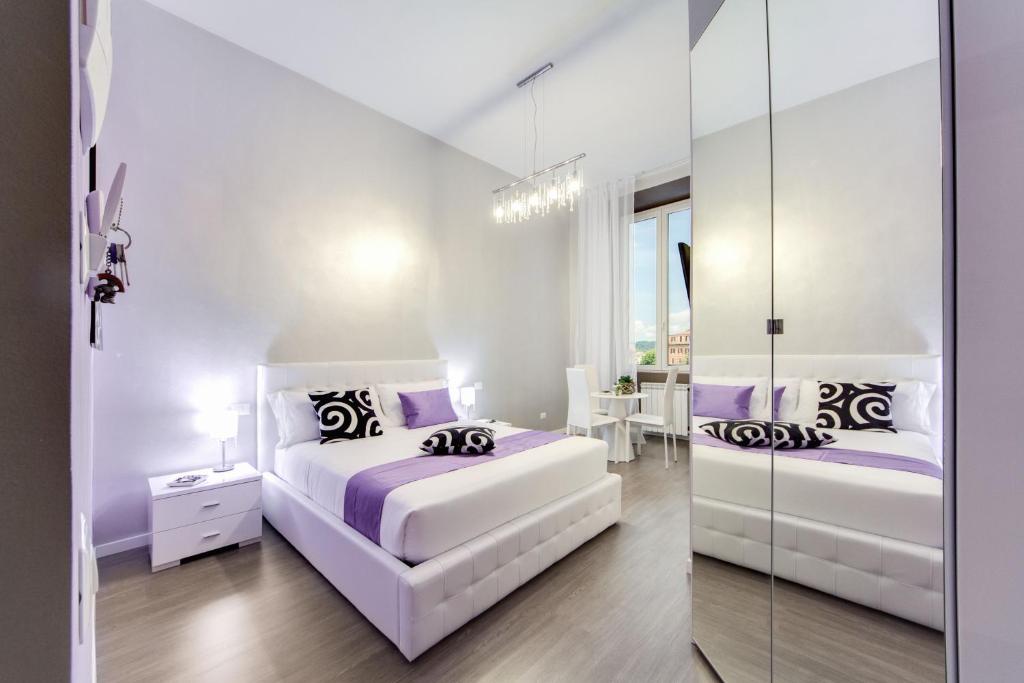 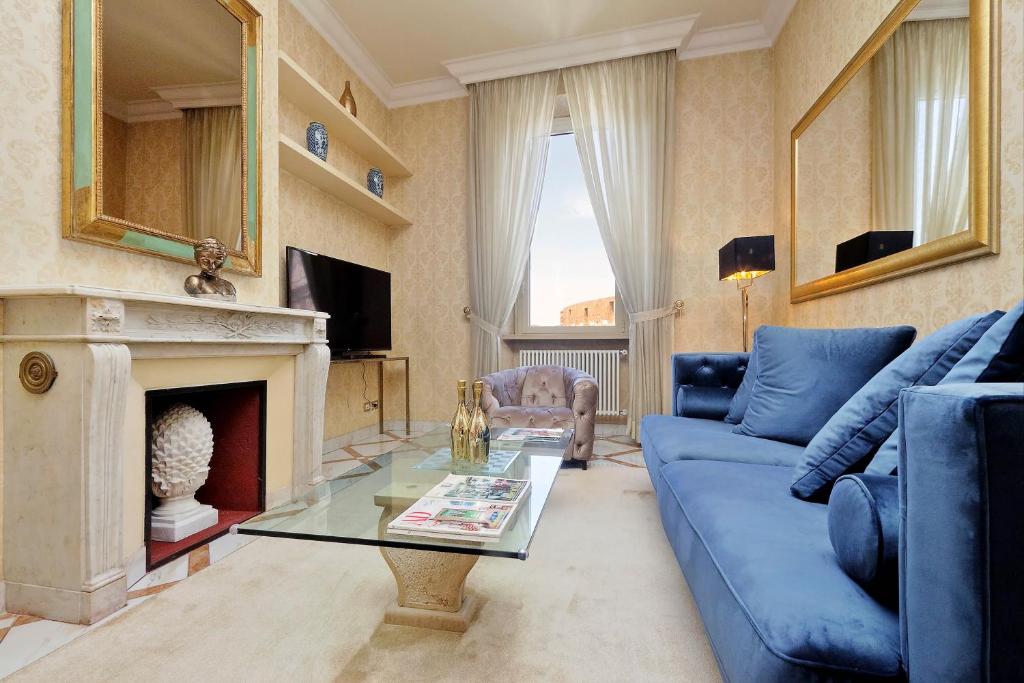 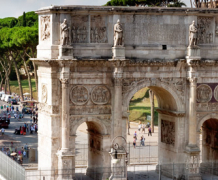 Arch of Constantine
One of the largest arches in the history of Rome, the Arch of Constantine was built in 315 AD. It is located between the Colosseum and the Palatine Hill on the Via Sacra. It was constructed to honor Constantine I's victory over Maxentius at the Battle of Milvian Bridge. 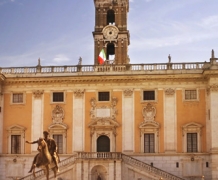 Capitoline Hill
The Capitolium has been the embodiment of Rome’s greatness from ancient times. The Temple of Jupiter Capitolinus is situated here and gave the title “Capitolium”. Later, it was used to define the location in general. Many beautiful buildings and attractions are concentrated in this area. 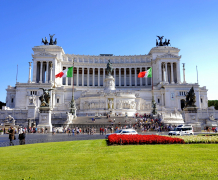 Vittoriano
Vittoriano is a memorial complex erected in honor of Victor Emmanuel II. He was the first king of unified Italy. Nowadays, the monument attracts tourists not only with its history and architecture but also with the on-site museums and an observation deck. 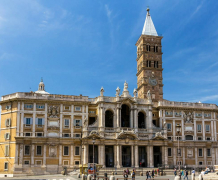 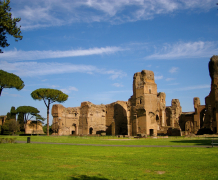 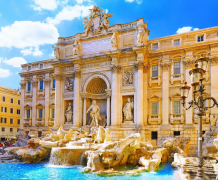 Trevi Fountain
The Trevi Fountain is one of the most well-known and melodious places of interest in Rome. The fascinating sounding and beauty of this construction inspired the Italian composers to create their musical works. 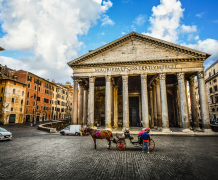 Roman Pantheon
The Pantheon is the architecture and historic monument and one of the attractions in Rome. It was intended to be the temple of all ancient Roman gods. However, after the fall of the Roman Empire, it was reconsecrated into the Catholic church of St. Mary and the Martyrs. 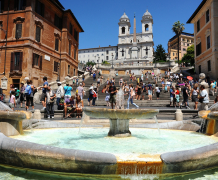 Spanish Steps
The Spanish Steps (Italian La scalinata di Spagna) is a popular meeting place in Rome and is considered to be one of the most beautiful stairs in Europe. An idea to construct stairs that would connect the foot of the Pincian Hill with its peak came to the French diplomat Étienne Gueffier. 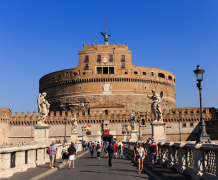 Castel Sant'Angelo
Castel Sant’Angelo is a monumental architectural memorial that dates back to the period of Ancient Rome. Throughout its history, the construction had been used as a fortress, popes’ residence, a mausoleum, and even a prison. 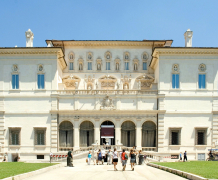 Galleria Borghese
The Galleria Borghese is the most famous gallery in Rome with the largest collection of paintings and sculptures. At the end of the XVI century, the wealthy Borghese family moved from Siena to the North of Rome. Gradually, it spread its authority of the Rome aristocracy and Catholic church. 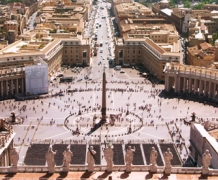 Vatican
Vatican City received was named after the name of the hill when it is located, Mons Vaticanus. The tiniest country in the world is the sovereign state and the most attractive tourist destination in Rome. Vatican City is located in the western part of the Eternal City. 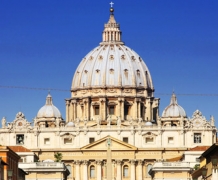 St. Peter's Basilica
St. Peter’s Basilica is the largest construction in Vatican City. It is perhaps the most grandiose and significant Catholic church not only in Italy but in the whole world. Guests and tourists in Rome are always astonished by the majesty of this attraction. 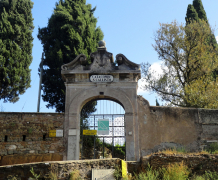 Catacombs of Rome
The Catacombs of Rome (Italian: Catacombe di Roma) is an enormous network of underground tunnels that started to appear in the pre-Christian epoch. Back in those days, these tangled tunnels were a burial place. Nowadays, they are a popular attraction of the Italian capital. 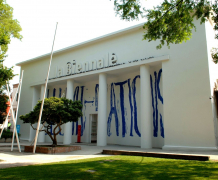 The Venice Giardini
There is a charming place in Venice, a collective human and nature creation that is known as the Venice Giardini. From 1895 the art festival more commonly known as Venice Art Biennale is held in the garden. 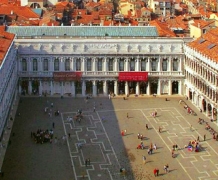 Museo Correr
The Museo Correr is perhaps one of the most significant and interesting attractions in Italy. The gallery was founded in 1830 and is considered to be one of the best Venetian bohemian and historical collections. 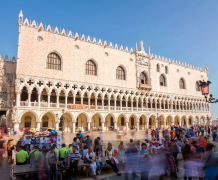 The Doge’s Palace
Probably, everyone, who comes to Venice, seeks to see one of the most magnificent monuments of the city - the Doge’s Palace (Palazzo Ducale). Doge is a title of the Venetian republic rulers elected by the people.